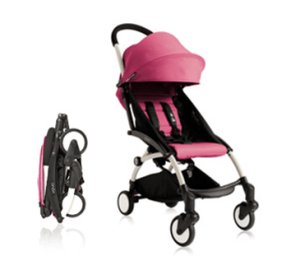 When the Babyzen Yoyo launched last year it became an instant hit as the first folding buggy to fully comply with size recommendations for cabin luggage.The Yoyo 0+ has all the same great features as the existing YOYO 6+ but will accommodate babies from birth using a babynest and five-point harness to keep the baby snug and secure.

The newborn stroller is rear-facing with a pop-up canopy, foot cover and head support. By removing the newborn nest and adding the 6+ pack (seat base and hood, £70), parents can convert the Yoyo 0+ to the existing Yoyo 6+, an outward facing stroller with multi-position reclining seat.

The featherweight buggy has a folding mechanism, which allows it to be opened and folded in seconds with just one hand and it can then be carried over your shoulder with the detachable shoulder strap.

My first impression was that the Babyzen Yoyo 0+ looked more like a dolls’ buggy, particularly when standing next to my Quinny Moodd. It is tiny. But looks can be deceiving and on putting it through its paces I found this sleek, compact, buggy really packed a punch.

Will it fit though my front door?

Anyone with a large pushchair will have no doubt avoided certain shops because the aisles are too close together or the doors are too narrow, but Eric and I whizzed around fashion boutiques and busy supermarkets in the Yoyo without a single bump.

Is it easy to push?

The handlebar was soft to hold and the chassis was surprisingly shock absorbent, making the ride comfortable for both parent and baby on any surface, and for any length of time.

Tackling different terrains was another thing I’d been quite sceptical about, but again the Yoyo came up trumps. It travelled like a dream across flat, smooth pavements and was easily steered with one hand.

It also took well to grass and wasn’t the slightest bit fazed by the cobbles in our city’s Old Town district. On the whole kerbs didn’t prove a problem and could be negotiated with one hand, although I found very steep kerbs were best tackled by reversing up them.

The only surface it struggled with during our test were badly cracked, uneven pavements as the front wheels tended to get jammed in the cracks, causing the back wheels to lift.

How compact is the Babyzen Yoyo?

It’s clear to see that going on holiday is where the Yoyo would come into its own. It’s compact size, one-handed folding action, shoulder strap and compliance with hand luggage requirements means it is bound to make travelling with a baby less stressful. And the Yoyo is fabulous for trips out in general.

I found the ease with which I could pack it up and put it in the car a far cry from the rigmarole I’m used to of taking my pram apart and wedging it into the boot. Not only would the Yoyo fit in the boot of any car, it would happily sit in the footwell of the rear seat.

How does the buggy fold?

When I caught a bus in the city centre, other passengers were quite entertained at how quickly and easily the buggy folded up and fit onto the parcel shelf.

Is there adequate storage on the buggy?

The downside was that the basket was too small to stash loads of shopping in – I managed a box of eggs, a kilo of flour, a pack of baby wipes and two bottles of baby bath, with just a little room left to spare.

It wasn’t very deep ether, meaning its contents were liable to fall out if the buggy was taken down very steep kerbs. This is only a minor point though when you consider much larger prams, such as the Silver Cross Surf, have a basket of a similar size.

Is the brake easy to use?

The Yoyo’s ‘push-push’ brake system is also very sensitive – great for when you’re waiting to cross a road but not so great if you keep catching it by accident. My partner had to watch his stride at times to avoid this problem, while I found it kept happening to me when I tried to take Eric on our morning jog.

Is it comfortable and safe for baby?

My biggest fear was that the baby nest wouldn’t be comfortable enough for my 12-week-old son. As he is used to being swaddled in a blanket before being placed in his regular pushchair, I didn’t think he would settle in the Yoyo.

I need not have worried as within five minutes of our road test he was fast asleep and remained so until I lifted him out.

I noticed previous reviews of the Yoyo had commented on flimsy straps, however the 0+ comes with a five point harness as opposed to three, and once strapped in Eric was totally secure.

Is the Babyzen Yoyo value for money?

It weighs around the same as the Micralite Super-lite (6kg) and while the Micralite comes in at more than £100 less than the Yoyo, the Micralite is not suitable from birth without the purchase of an additional carrycot. The Yoyo’s canopy is also larger and more forgiving.

Who’s the Babyzen Yoyo best for?

As someone who is used to covering at least four miles a day with my newborn, across various terrains, I’m not sure the Yoyo could stand such a sustained hammering over a long period of time.

After two weeks the wheels were beginning to look a little worn and the babynest zip needed a spot of fixing after coming loose. That said, it coped with every scenario we threw at it, so I think it would be good for urban parents and frequent travellers.

What’s in the box?

Are there any additional extras?

Anyone who has assembled a buggy before will be used to picture diagrams and thanks to the colour coding and arrows, I found the Yoyo’s instructions easy to follow. There were, however, a lot of bits to put together, so it took me a while to construct as I was trying to amuse my 12-month-old son, Eric, at the same time.

As the first buggy to comply with cabin hand luggage requirements, this product’s main selling point has to be its size and weight (6.4kg for the 0+ buggy), which make it perfect for travelling.

However, I found it was also a Godsend in everyday scenarios, from shops and busy streets to impromptu trips in the car. Innovation doesn’t come cheap, as reflected in the price tag, although with an additional colour pack (£70) the Yoyo will see you through from newborn to toddler, boosting its value-for-money credentials considerably.

Despite my initial fears that it looked more like a toy than a ‘real’ buggy, the Yoyo far surpassed our expectations in terms of durability and comfort. If you’re looking for comfort and convenience or are tired of bulky buggies then I’d definitely recommend you gave the Yoyo a whirl.

Review from: Made For Mums 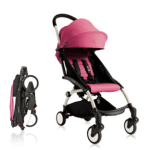 Vikalou is driven by parents' own reviews of their products; become part of the community and submit your product reviews.

Vikalou is driven by parents' own reviews of their products; become part of the community and submit your product reviews.